exploratory and generative research for a university design lab

As a research assistant for Dan Lockton's Imaginaries Lab, I explored new methods for expressing thinking about complex phenomena through the use of a landscape metaphor. 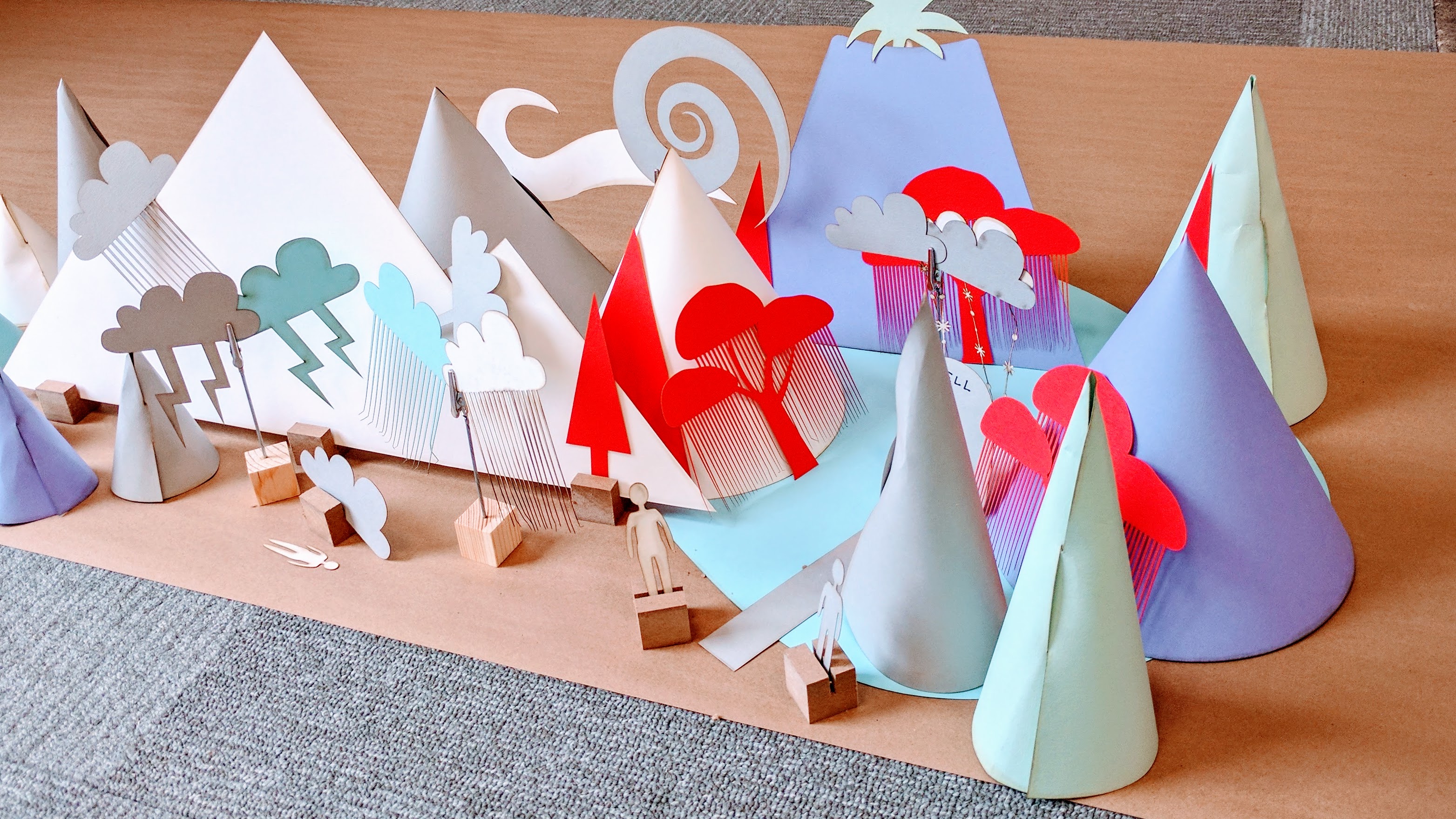 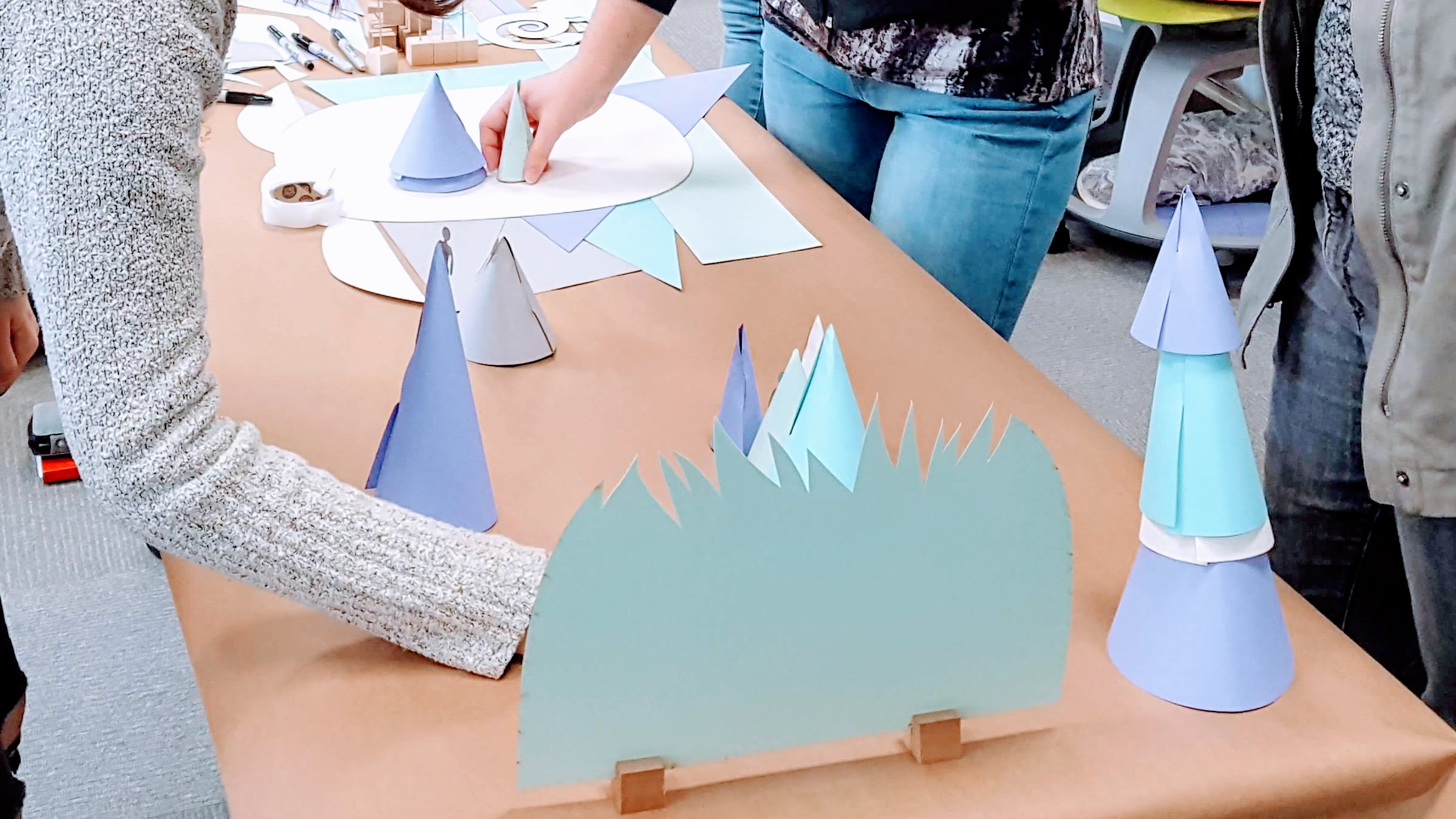 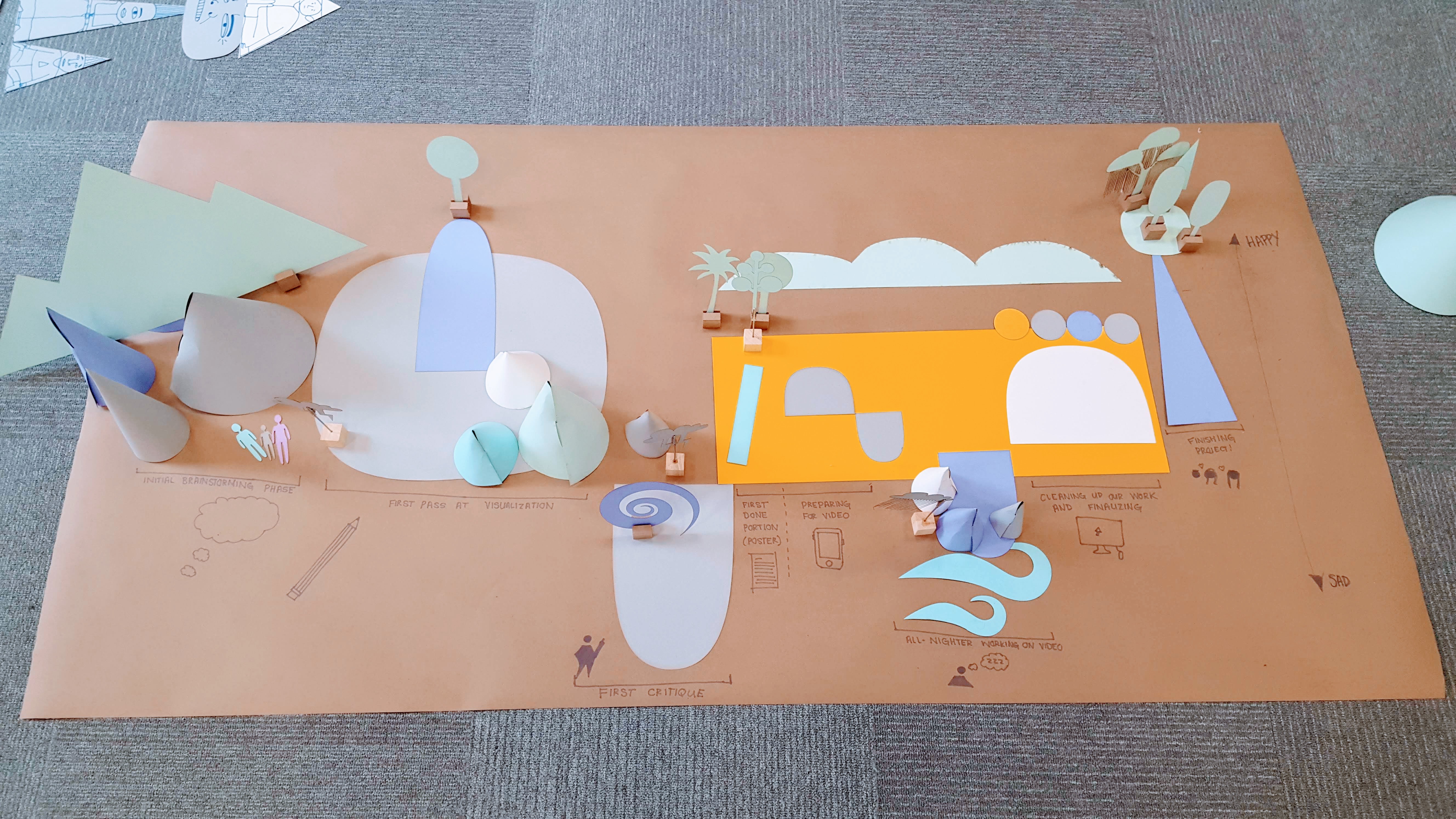 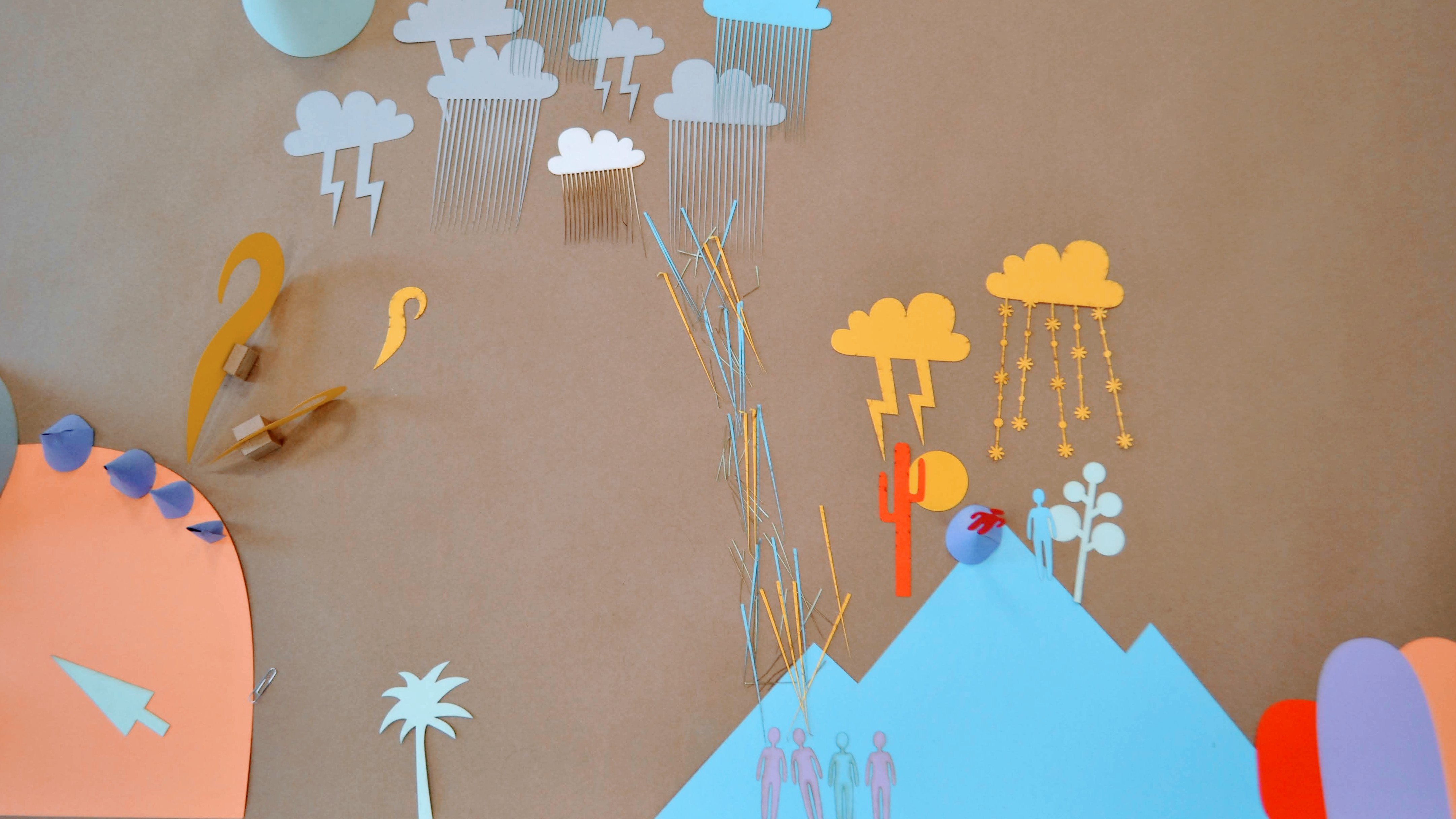 I began this project with an audit of qualitative methods of expressing thinking about complex phenomena writ large. As I reviewed various examples, I began coding them according to method, topic, and audience.

One of the most compelling examples I found was of a landscape, meant to visualize the experience of completing an online course. Although the visualization was coupled with a quantified measure of progress (points), I found the landscape to be most representative of my qualitative experience of the course.

To further investigate the utility of using visual landscape metaphors to explain complex phenomena, I designed a series of simple paper cut-outs of features such as hills, trees, weather, and people. By informally asking peers to use the elements to create a landscape of their career paths, I hoped to gain insight into the following questions: Do visual information landscapes provide a useful framework for people to understand their own career path? Are there shared methods of utilizing a visual framework?

Broadly, I found that the framework was useful as a reflection tool to express emotional parts of an experience that are difficult to express verbally. Moreover,prescribing a metaphor and pre-cut elements forced people to think about their experience in a different way, which proved to be valuable in and of itself.

A timelapse of one person's career-scape.

While people found the metaphor and elements to be a useful and creative reflection tool, several expressed that it was difficult to show how their perspective changed over time within a two-dimensional format. Through a second iteration of elements, I aimed to provide greater variation as well as enable three-dimensional expression. In addition, I wanted to explore how the metaphor could be used to think through a different topic, project planning or reflecting rather than career, and in a group rather than individual context.

To test this second iteration of landscape elements, I led a workshop with 45 undergraduates during which I asked the students to form small groups and collaboratively create 'landscape' models representing projects they have worked on together. Each group used the elements in different ways to represent different aspects of their projects, through creating 'timeline' landscapes in both two and three dimensional formats.

Some projects started with rocky beginnings, represented by different cones or hills, in order to show how difficult that part of the project was. Other projects started with trees, rivers, and stars, representing periods of calm ideation, research, or general feelings of optimism. When projects encountered new difficulties later on, many groups represented these periods with lightning, rain, hills, and cones. Several groups used (and came up with names for) metaphors within the general landscape metaphor to represent specific parts of their project experiences, such as a "plateau of exhaustion" before the project came to an end. 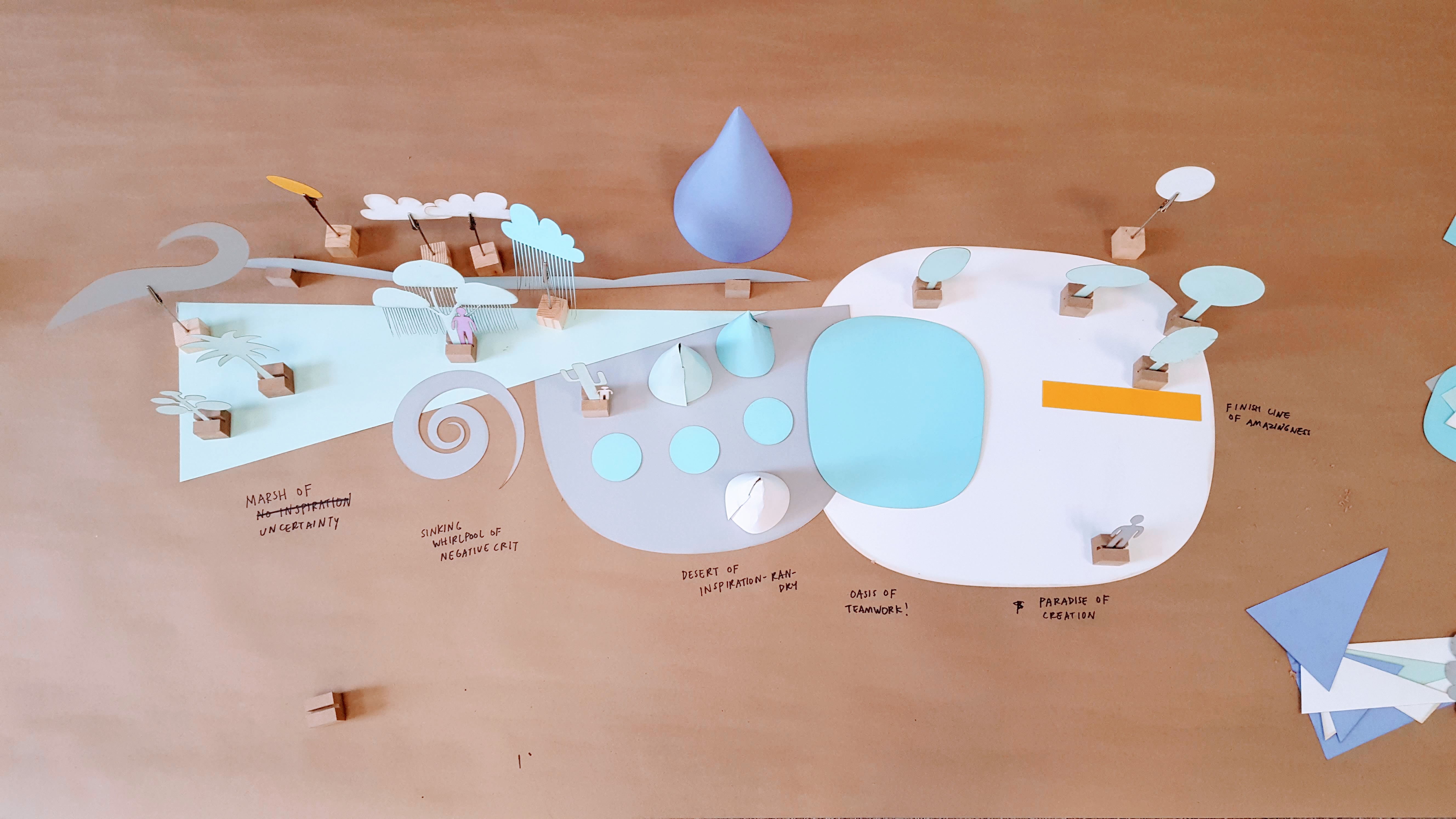 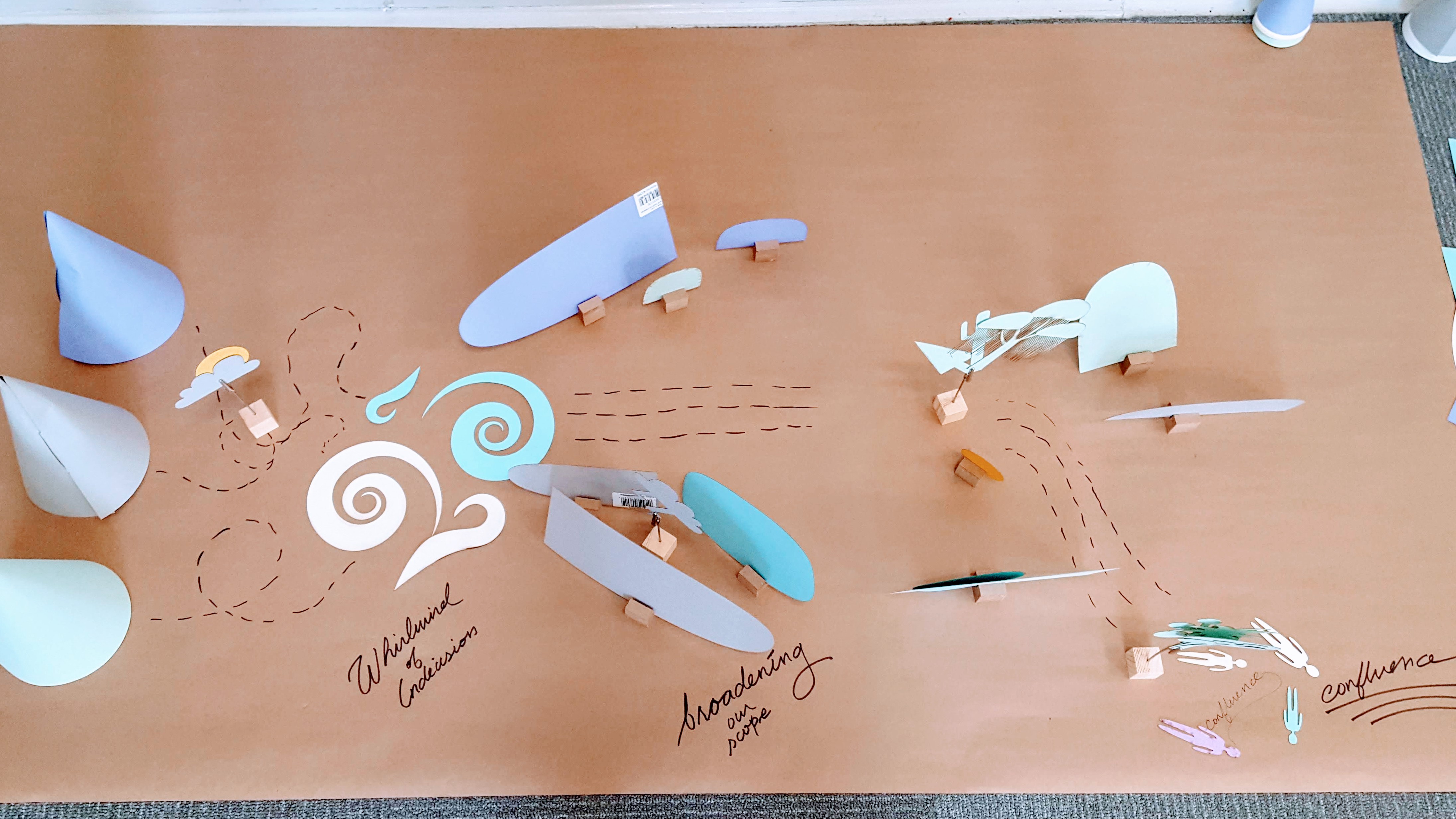 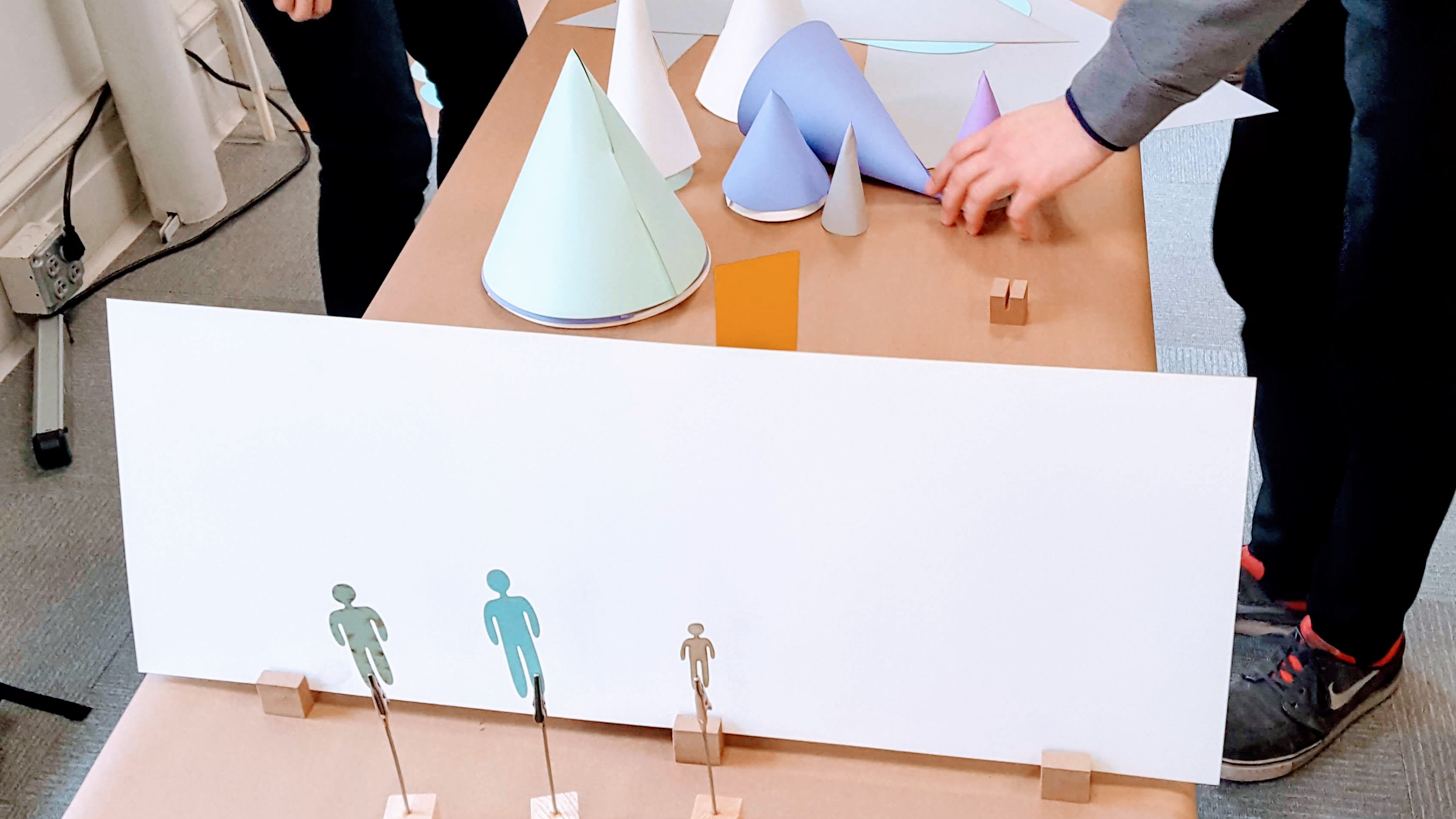 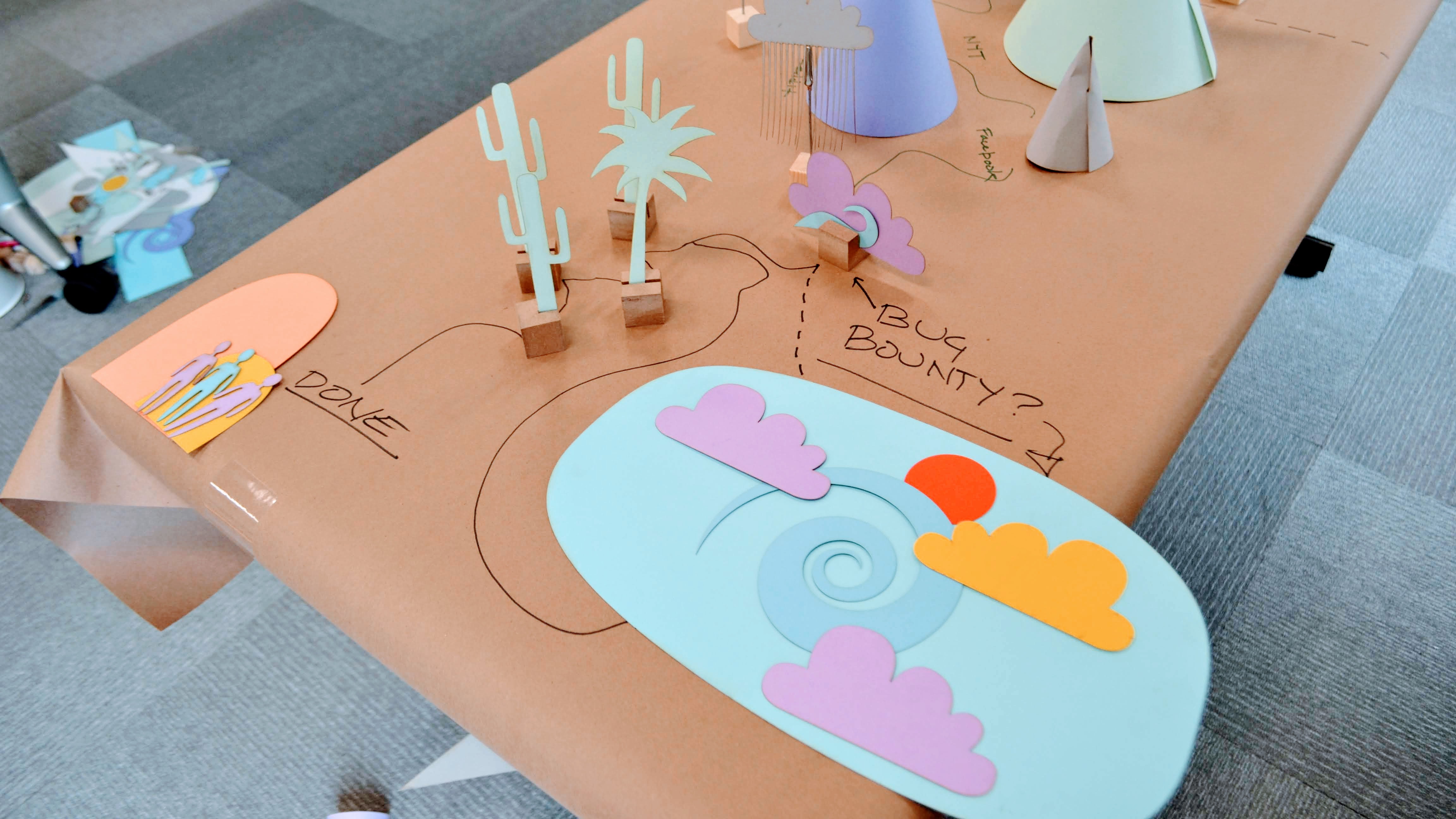 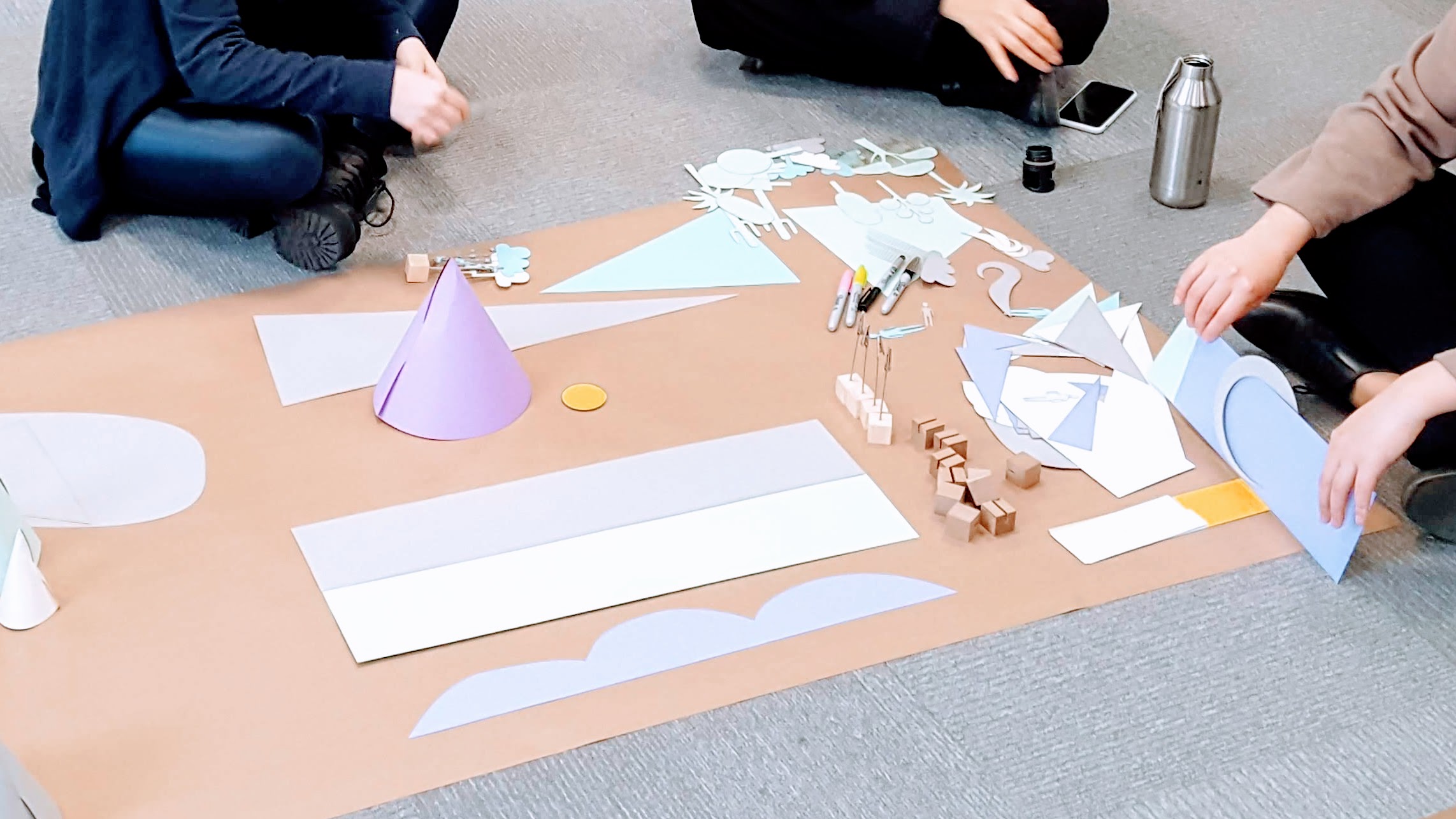 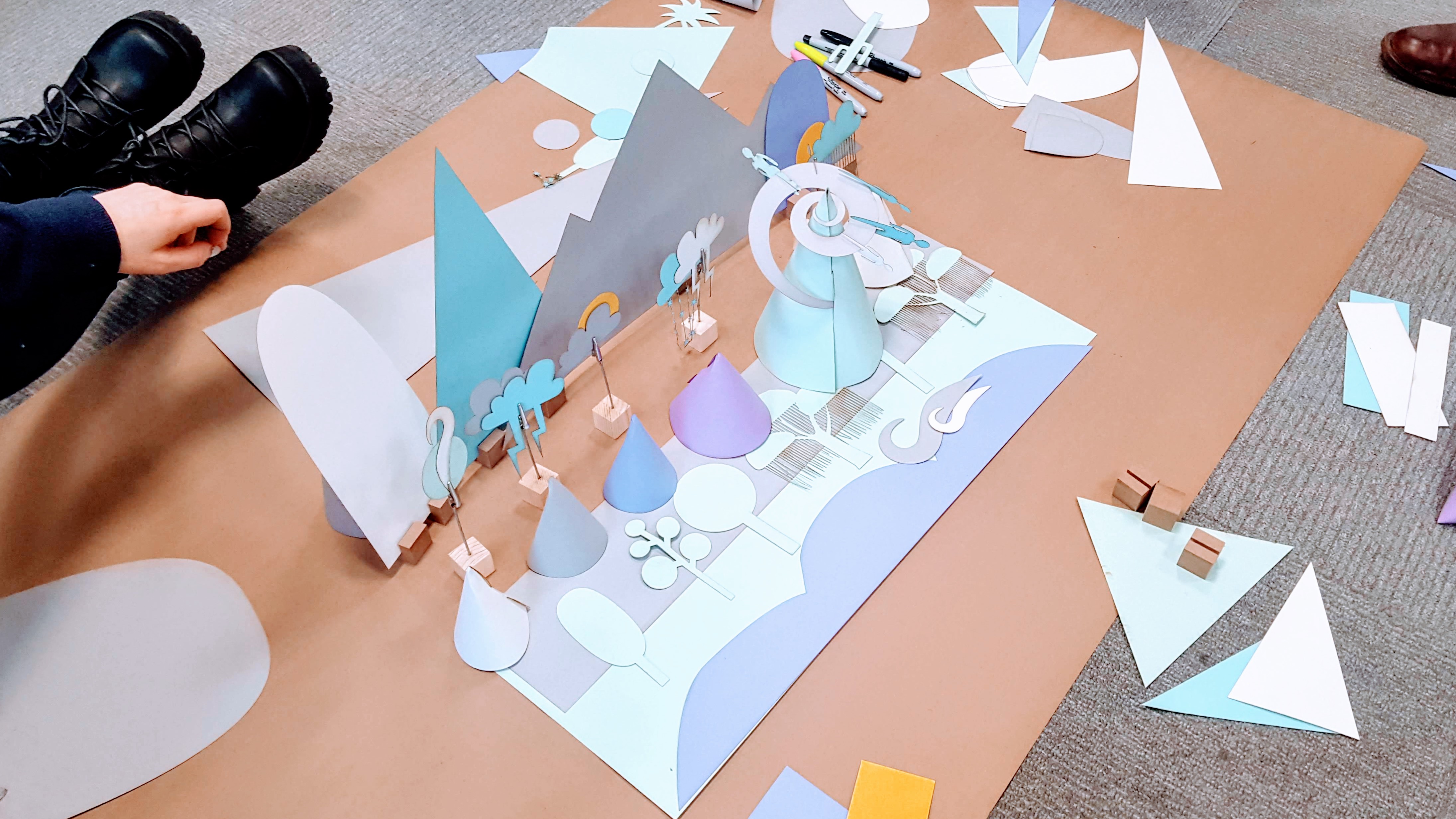 Previous Next
Each group created a landscape unique to their experience of working together.

Students' responses to trying out this second iteration of landscape elements, applied to group projects rather than individual career paths, suggested that they found the process fun and creative, while also abstract. Many participants commented that the tool helped them understand their project and teammates' perspectives better, especially in terms of stress, productivity, and overall emotional satisfaction at different points throughout a project's lifetime.

The format is more useful for surfacing — and reconciling — overarching understandings than probing for deeper insights about the specifics of complex experiences, but, in triggering discussion, it has value in enabling members of a team to understand and interrogate each other's perspectives and mental models of a situation.